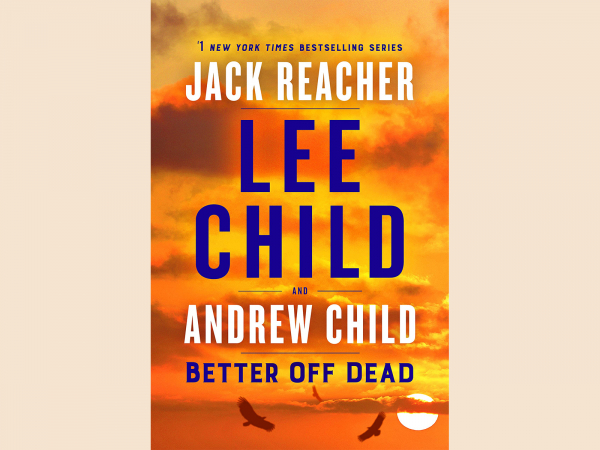 1. Better Off Dead Child, Lee
Jack Reacher is good at finding people who don’t want to be found, so he helps a former FBI agent trying to find her twin brother. Dendocker is a mysterious leader who rules a border town from the shadows. What does he know about the missing brother?

2. State of Terror Hillary Rodam Clinton/Louise Penny
The new female Secretary of State and the newly elected President don’t agree about much, except they must fight to stop a nuclear bomb plot in the U. S. The reader even gets a brief peek at Three Pines.

3. Cloud Cuckoo Land (640 pages) Doerr, Anthony
The book takes place in the 15th century, the 20th century, and the not-so-distant future on a spaceship. The characters are dreamers and outsiders who triumph in the face of danger. A library book ties it all together and the book is dedicated to librarians.

4. The Judges List Grisham, John
Lacy Stoltz investigates corrupt judges, but she is getting tired of her work. Then she meets a woman who is looking for the person who murdered her father 20 years ago. The chief suspect is a man who is a cunning serial killer, and he is a judge in Lacy’s jurisdiction.

5. The Paper Palace Heller Miranda Crowley
Elle and her oldest friend, Jonas, sneak outside of her summer house and have sex, while their spouses chat inside. Elle now must decide between a life with her beloved husband or her childhood love. This book considers the tensions between desire and dignity, the legacies of abuse, and the crimes and misdemeanors of families.

6. Billy Summers King, Stephen
Billy is a killer for hire, but he wants to get out of the business. There is one last job, but he will only do it if it is a truly bad guy. The book is about love, luck, fate, and a hero who needs redemption.

7. Count the Ways Maynard, Joyce
Eleanor and Cam have three children and an ideal marriage, until there is a terrible accident that is Cam’s fault. She can’t forgive him, and they split up. He marries a younger woman, and she focuses on her family. Over the following decades, everyone must confront painful truths and find redemption.

8. Apples Never Fall Moriarty, Liane
The Delany family owned a renowned tennis academy and all four of their children were tennis stars in their youth. The mother goes missing and no one reports her as missing. The husband is the main suspect. The children take sides on who is responsible.

9. The Jailhouse Lawyer Patterson, James
In Erva, Alabama, the most serious crimes are misdemeanors, so why is the jail so crowded? Why do so few people get released? “Sometimes the best education a lawyer can get is a short stretch of hard time.” (Amazon)

10. Bewilderment Richard Powers
An astrobiologist and single parent after the death of his wife, has an increasingly troubled son. He learns of an experimental neurofeedback treatment that involves the recorded patterns of his mother’s brainwaves.

11. The Wish Sparks, Nicholas
Maggie is a renowned photographer in New York. She has a sobering medical diagnosis and a young assistant whom she is dependent on. She tells him the story that set her on the course of her life.

12. The Lincoln Highway Towles, Amour
Emmett is just recently released from a juvenile work farm where he was held for involuntary manslaughter. He plans to pick up his 8-year-old brother and head to California to start a new life, but they end up in New York City. The book spans just 10 days and is told from multiple points of view.